Cheesy Taco Stuffed Peppers with Beef are a healthier alternative to traditional tacos. Loaded with all of the familiar seasonings and flavors, but with way less calories!

Stuffed peppers are life right now! When it is time to think about what’s for dinner, it’s easy to get bogged down. Taco Tuesday has always been a tradition in our household. The kids expect tacos, and it makes life easy when it’s time to cook!

Sometimes eating the same thing over-and-over gets boring though! That’s where these delicious peppers came into existence. Trying something new, that has now turned into a family regular, and family favorite.

Ingredients needed for the Cheesy Taco Stuffed Peppers with Beef:

Do I need to boil the bell peppers first?

Although the peppers can be stuffed and placed directly in the oven, I recommend boiling them first. Having tried both methods, parboiling the peppers first have yielded the best results.

Placing them in a large pot of boiling water for about 10 minutes is best. After that, they can be stuffed and placed in the oven. This results in a tender-crisp texture for the peppers.

How to cook stuffed peppers without boiling them first:

Follow the same steps with prepping the peppers (cutting the stem off and cutting them lengthwise. Place about 1 cup of water into a 9×13 baking dish and place stuffed peppers into the dish.

Cover the dish with foil, and bake in the oven on 350 degrees for one and a half hours. Be sure to check water levels frequently, as the peppers can burn. This method takes longer because the peppers need to get tender.

For these particular stuffed peppers, beef stew meat was used. Honestly, it’s what was in the freezer! We have made them with ground beef in the past. Another great meat option is ground turkey or chicken.

Even better, use leftover roast beef! Finely shred or chop it, and follow the same steps to make the taco stuffed peppers. Great way to use-up leftovers.

Benefits of cooking meat in the Instant Pot:

Using the Instant Pot to cook the meat shaves off over an hour of cooking time! If you do not own a pressure cooker or Instant Pot yet, it is highly recommended. Saute the meat, and pressure cook for 20 minutes, wah-lah! Super tender and juicy meat is produced.

Firstly, prep the peppers (say that three times fast)! Cut the tops/stems off of the peppers. Cut them down the middle, lengthwise. Bring a pot of water to a boil, large enough to cover the six pepper halves.

While the peppers are boiling, set the Instant pot to saute mode. Thoroughly season all of the meat and mix well. Add one tablespoon of olive oil to the Instant Pot. Saute the meat in batches, in one even layer until it is browned. About 5-7 minutes.

Preheat the oven to 375 degrees. Once all of the meat is browned, add the meat and the taco or enchilada sauce, and water back into the pot. Set it to pressure cook, or meat mode and cook for 20 minutes. Roughly chop the meat into bite size pieces.

Remove the peppers from the boiling water and place them into the 9×13 baking dish. Place the cooked meat, rice, and cheddar cheese into a large bowl. Reserve a half a cup of the cheese mixture to sprinkle over the top. Mix it up until it is all combined.

Spoon about one quarter cup of the meat mixture into each pepper. Sprinkle the remaining cheese over the top of each pepper. Cover the dish with foil and place it in the oven for 20 minutes.

After 20 minutes, remove the stuffed peppers from the oven. Allow them to set and cool down a bit. For about five to ten minutes. Enjoy with your favorite salsa or hot sauce!

Meat can be cooked on the stovetop using the same methods for an hour to two hours. See post for details.

As an Amazon Associate and member of other affiliate programs, I earn from qualifying purchases.

This website provides approximate nutrition information as a courtesy and for convenience only.

Be sure to tag me on Instagram or Facebook when you make this recipe! I would love to see your creation, and give you a  shoutout! 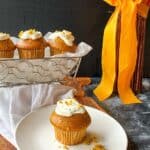 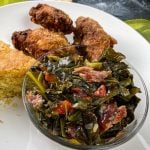 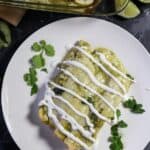 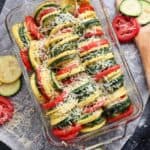 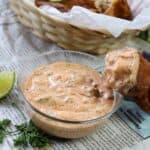 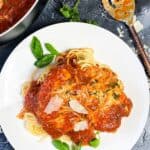